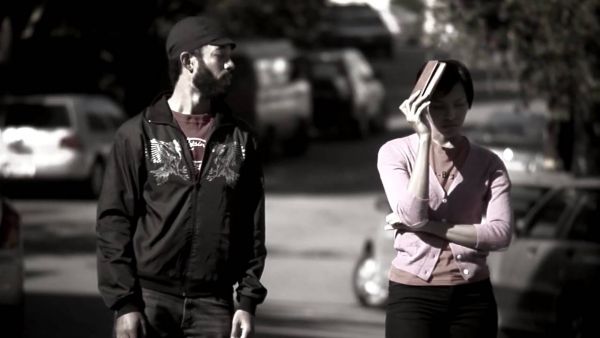 This Friday, November 18th, FilmScene will be playing what is arguably the most acclaimed movie of the year, Barry Jenkins’ Moonlight. Before Moonlight, though, Jenkins wrote and directed Medicine for Melancholy some eight years ago now.

The most immediately noticeable aspect about Medicine for Melancholy is its starkness. The movie lives in a San Francisco desaturated of most of its color – and why should it have color? Blacks like Micah and Jo, our leads, only make up 7% of the population in the city. And what comes with a minority population are two fates: maintenance of identity or cultural assimilation. The movie’s conflict is built around this division, with Micah aligning with the former fate and Jo aligning with the latter.

Or Medicine for Melancholy could easily be seen as a love story, which it is. It follows the day after a one-night stand. Besides active and passionate discussion by Micah about racial identity, the movie is kind and sweet. Wyatt Cenac and Tracey Heggins are the only people on screen for most the brief movie, but they are good company. It is impressive to see Cenac, a proven writer and comedian, take on a dramatic role like this one. Heggins’ performance is as solid as it is because Jo is such a well-written character; she easily passes the Bechdel Test.

Unfortunately, the movie is not great. Jenkins fails to balance the romantic aspects of his movie with his perspective on the background in 2008 San Francisco. There is a scene with Micah recalling the San Francisco of the past that is beautifully colored; this scene is the best of its kind because it feels natural. There is an argument at the movie’s climax that covers similar themes that unfortunately fails to stick, it doesn’t feel natural.

Medicine for Melancholy is at its best as a conversation between a man and woman, regardless of how slight that might seem. Fortunately, it is just that for most of the movie. It’s no Before Sunset, but it is still worth a watch. The movie has aged quite well since it was released in 2008, it has gone on to influence Chris Rock’s underrated Top Five. For a movies so stark, it is an enlightening watch for an hour and a half.

Medicine for Melancholy is free to stream with a Netflix subscription. Sean Wu is an avid consumer of mass media. He is currently a part of Bijou Horizons. More of his writing can be read here.